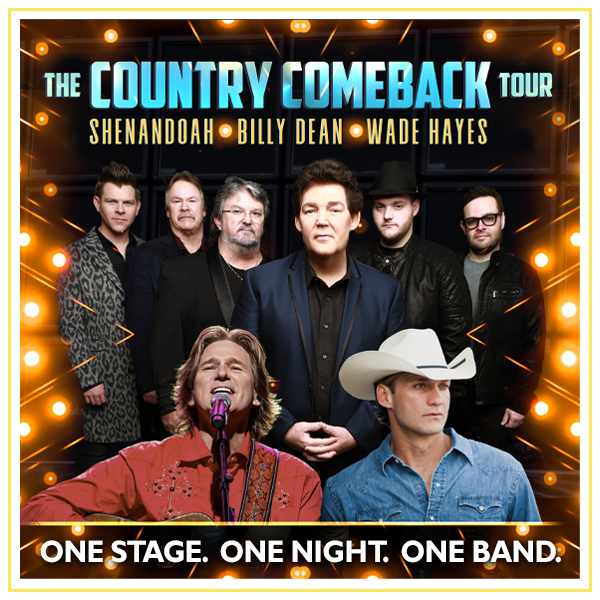 GRAMMY®, CMA and ACM-winning hitmakers Shenandoah, fueled by Marty Raybon’s distinctive vocals and the band’s skilled musicianship, are celebrated for delivering such hits as “Two Dozen Roses”, “Church on Cumberland Road” and “Next to You, Next to Me” as well as such achingly beautiful classics as “I Want to be Loved Like That” and the GRAMMY® winning “Somewhere in the Vicinity of the Heart” duet with Alison Krauss. Today that legacy continues as original members Marty Raybon and Mike McGuire launch a new chapter in Shenandoah’s storied career with the Country Comeback Tour.

A modern-day American Troubadour, Grammy nominated and ACM award winning Billy Dean, has performed and toured with some of the industry’s biggest country music stars, and is now joining Shenandoah and Hayes on stages across the country. Dean’s music has become the soundtrack to our lives with such hits as “Billy the Kid”, “We Just Disagree” and ACM Song of the Year “Somewhere in My Broken Heart”.

Wade Hayes was in his early 20s when he began churning out such enduring hits as “Old Enough to Know Better,” “I’m Still Dancing with You” and “On a Good Night”. His recent work “Go Live Your Life” is an upbeat anthem about making the most of every day and reveling in the things that bring you happiness; inspired by surviving cancer twice.”